The boat screwed around on the anchor on and off through the night, and rain fell heavily, with squalls continuing into the morning. A day to sit tight and wait out the weather. As the day improved Fiona and I inflated the kayak and went for a spin around the bay, greeting our neighbours, both wooden boats one from Cygnet and the other from Franklin, each crewed by a pair of older gentlemen. Then we went ashore in the north-east corner where a track of sorts heads up Mt Stokes and Mt Misery. We scrambled uphill a little way, for an increasingly spectacular view of the Bathurst Channel and surrounding mountains, but decided we would come back for the full walk when we were better prepared. The track was very hard to follow and we got lost on the way back, scrub-bashing our way back to the cove where we had parked the kayak.

Later, Peter, from Vardo came over in search of the weather report I had promised him. Here we were out of VHF radio range and couldn’t receive the weather sked. But using the sat-phone Derek was able to download some weather information. This showed the weather deteriorating later in the week, so we decided we would seize the following day for a dinghy trip up the Davey River to the Gorges.

In the afternoon we dodged the showers and all three of us shuttled ashore in the kayak for the walk up to Mt Stokes. Once again we lost the track – not maintained at all by Parks & Wildlife, the anchorage guides suggest that they actually discourage use of the track as it is a phytophthora-free area, so we made sure we scrubbed our boots well before and after the trip to minimise the possibility of spreading this plant disease which lays waste to our sensitive vegetation. We picked out what we hoped were tracks, but inevitably these proved to be wombat trails, dotted with their characteristic square droppings. Unfortunately wombats don’t usually go looking for mountain-top views!

The view from the top, once we did make it, was superb. We could see out to the Southern Ocean, and the many rocks that dot the entrance to Port Davey. Running east to west we could follow the path of the Bathurst Channel, with its many coves and islands, and to the north the craggy face of Mt Misery close by and either side barren mountain ranges stretching into the distance. 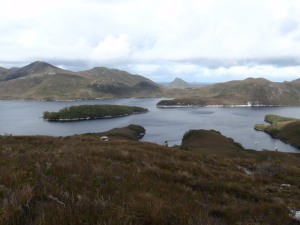 Bathurst Channel with Ariadne’s Clew at anchor in Wombat Cove

Called Mt Berry on the map, it is commonly known as Mt Misery, which seems to fit. The ridge up to the summit looked very steep and exposed, but the view from the top would be quite something. Considering the non-existence of a well-marked track and the high likelihood of getting caught in mist, we were not tempted to try the climb. Besides it looked like hard work. 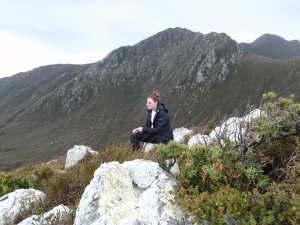 Fiona on top of Mt Stokes, with Mt Misery behind

Coming down, we once again lost the track and ended up on the same unorthodox approach to our kayak. Fortunately we made a safe descent.

That night at anchor was blissfully still and mild. With a two-thirds moon and a ragged gap in the clouds, I lay on deck to watch Orion for a while before heading to bed for a restful night.