The wind didn’t let up all night, so we pulled up the anchor soon after sunrise, hoisted the sails and turned south. It was time to begin the long trip home. This doesn’t mean our adventures are over though – ahead of us are at least four days of travel, probably more. 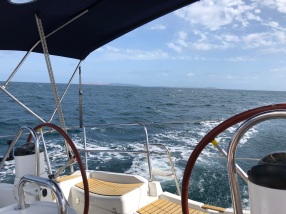 We were soon skimming along with 15 to 20 knots of wind on our beam, the tide behind us, a reefed main and short headsail, and making good progress down the west coast of Flinders Island, weaving our way between islands, islets and rocks. Which got me to wondering what’s the technical difference between them all? When does a rock become an islet, or even and island? The answer it seems all about human habitation. According to expert Ian Storey: ‘Technically, an island under international law must be above sea level at all times and capable of human habitation.’ [see ABC article here] The definition has been under scrutiny since China started colonising the South China Sea and turning rocks and islets into habitable islands…

South of Roydon Island we passed the Pascoe and Chalky Islands, Mt Chappell, Badger, Goose, East Kangaroo, Big Green, Prime Seal and a host of little ones such as Ann Islet (which looked like a bunch of rocks and definitely not capable of human habitation).

We thought we were alone on the sea today, until I spotted a sail way down south. For a long time I was wondering which way it was travelling until I realised that it was actually the lighthouse on Goose Island! All along the way we saw thousands of short-tailed shearwaters circling, rafting and wheeling on the air currents. Hard to spot as they’re black, here’s a photo of them surrounding the boat:

Big on the horizon loomed truwana/Cape Barren Island, the second largest in the Furneaux group, with the imposing heights of Mt Munro (715 m) at its centre. A large portion of this island has been handed back to the Tasmanian aboriginal community, and in my past life at the Tasmanian Writers Centre I’d got to know Jim, an aboriginal elder, poet and philosopher, who is a permanent resident. I had let Jim know we were coming, but when we were unable to reach Cape Barren on our sail north I thought we might have missed him. I sent him a message this morning on the off-chance. As we approached the north west corner of the island the wind was peaking at over 25 knots from the east – there was no way we could attempt to enter the shallow channel between Long Island and the harbour at The Corner, the main town on Cape Barren, so we continued around to the relative shelter of Thunder and Lightning Bay on the south-west coast.

This wide and beautiful bay, surrounded by orange lichen-covered granite boulders, was out of the swell and wind-waves, but the wind still whistled over the low, lightly vegetated ground. A catamaran, Portfolio, which we’d seen two days before near Emita, was anchored off the southern end of the beach. We anchored nearby, being careful to find a sandy patch on which to drop the anchor, and I concocted a salad from the last of our lettuce and fresh veg and a few eggs courtesy of the feathered ladies at Partridge Farm. After lunch we debated the idea of going ashore to explore the beach. The wind was still whistling around us, but it was sunny and the beach was inviting, so we launched the dinghy over the side and set out to explore.

We were dragging the dinghy up the beach when our neighbour Roger, from Portfolio, came to our aid and we got chatting. He and his wife are on their third sailing trip to Tasmania from the Gippsland Lakes. I looked over and saw a vehicle at the end of the beach and someone approaching – it was Jim! He’d got my message but we’d been out of range and I hadn’t seen his reply.

What a thrill to be personally welcomed to this amazing island. Jim chatted to us about the island, its wildlife and its history, the best way to cook a mutton-bird, and his boating and fishing experiences until Roger’s dinghy began floating on the tide and he took his leave. Then Jim took Derek and I for a personal tour of Cape Barren Island.

Just near the airstrip (2 flights a week from Launceston) there is a very appealing golf-links course – it must be one of the most remote courses in the world! The tidy little township houses around 75 permanent residents, though Jim is worried that this is an ageing population and the younger generations don’t spend a lot of time on the island. There is a school (around a dozen students in both primary and secondary schools) which has two staff and is administered by the Flinders Island District School at Whitemark. There’s also a general store and Community Centre. There are two farms on the island: one on the east end which is privately owned, and one on the west which has recently been handed to the community, but is currently not being farmed. This could conceivably become a community enterprise providing work and skills. The Fuglsang (or Fullshanks in Island slang) farm had cattle running on a community pasture near the township today as the cattle-boat is expected in soon to ship them to market. We saw these healthy-looking black cows munching away as we drove past, though Jim says the island is currently in drought which has probably meant the farm are reducing stock. 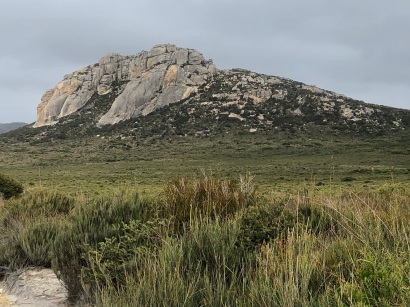 Jim drove us along the rutted gravel roads along the north coast to see the Devil’s Tower, an impressive granite stack, as well as some beautiful pockets of eucalypt forest where he regularly walks. On the way we he tenderly showed us the sad fate of the Molly, Jim’s own 31-foot steel yacht. After spending years restoring her in Hobart he sailed her up to the island and tied her to a mooring he had prepared, but he hadn’t secured a shackle-pin with a mouse (rope tie) and it broke in a storm, sending her up onto the rocks (a sad case of ‘for the sake of a nail the war was lost’!). Now she has an irreparable hole in the hull and all he could do was drag her up into the bush. At his home, where he then took us for a cuppa, he has repurposed a few salvaged items – a coffee table made from her galley table, in which he’s mounted the compass binnacle, and the stern-light used as part of a nautical wall decoration above a beautiful print of Molly at anchor on a misty morning.

We chatted about his new project – a master’s degree in aboriginal philosophy at UTas – and he gifted us a bottle of his very special home-brewed Worcestershire sauce. As the evening drew close he drove us back to Thunder and Lightning Bay (named, incidentally, not for the weather, but after wobberertee, one of his aboriginal ancestors –her name translates as ‘thunder and lightning’ – quite a woman I’m sure!) where he waved us off, staying to ensure we made it safely aboard in the windy conditions.

Later, I added a dash of Jim’s special sauce to our spaghetti Bolognese for dinner (not quite the Italian condiment, but I couldn’t resist). The sauce has quite a bite, with chili and a secret combination of native herbs and spices! This was a day we’ll always treasure – a real highlight of our trip so far. Thanks Jim!