The river was as still as a pond this morning, and the winter sky was low, with scraps of cloud caught in valleys and mountain tops, and smoke from bonfires and chimneys casting a haze over it all. Rain was pattering percussively onto the deck and canvass awnings, but fortunately we weren’t immersed in fog.

The rowing club was humming with activity when I got up. First the women’s fours set off with their coach following in a tinnie. Then half a dozen single sculls. The swans weren’t so impressed and flew off to find somewhere more peaceful.

Some of our fellow CYCT cruisers set off early, right on low tide. We hoped they wouldn’t get stuck in the mud!

We were still dawdling when I was contacted by my Mother. She and our family friend Helen were already in Franklin to meet us for brunch! We jumped into the dinghy and putted ashore to the rowing shed’s floating jetty to tie up. The rowers had packed up and were long gone. Together we drove the short distance to Frank’s Cider house. This cider tasting café is situated in a charming old hall, probably a facility of the old church just up the hill.

Frank’s is decorated inside with relics from a history of apple-growing and cider making. Helen was charmed with their history room. It transpires that her grandfather arrived in Tasmania in his late 50’s and bought up an apple orchard in the north-west. With no background in physical work, let alone apple farming, he took to it with gusto and was soon exporting apples to the UK. Here she was able to see the old apple sorting and grading equipment, as well as photos of the old draught horses at work in the orchards. 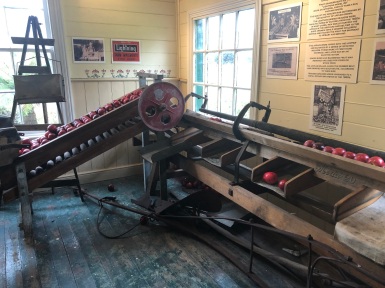 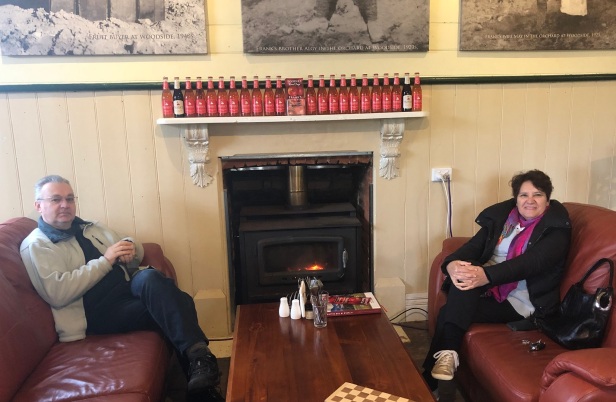 We sat by the roaring wood fire and treated ourselves to scones with jam and cream until it was time to get back to the boat and begin the long journey home. We waved goodbye to our visitors and then prepared the boat. The forecast was for strengthening winds during the afternoon, so we brought the dinghy on board rather than risking it capsizing in the waves.

Travelling downstream again the river presented a beautiful panorama of views and reflections. The pelicans were still perched on their log, and we saw swans, cockatoos and other birds along the way. 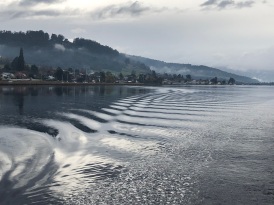 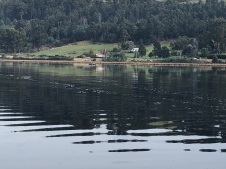 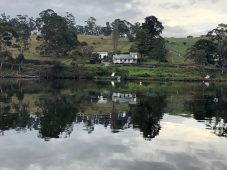 Past Port Huon the river was still glassy, and even into the Channel the wind did not pick up. I made salad for lunch from all the leftovers, and added half of the crisp and juicy Jonagold apple offered free to patrons at Franks.

We motored past Middleton in barely a breath of wind. Where were the 40 knot winds predicted by the BOM? We made it back in to Quarantine Bay before the sun set, and borrowed a mooring for the night. The anchorage was very quiet. I whipped up a simple chicken pasta dinner and we spent another peaceful night at anchor. 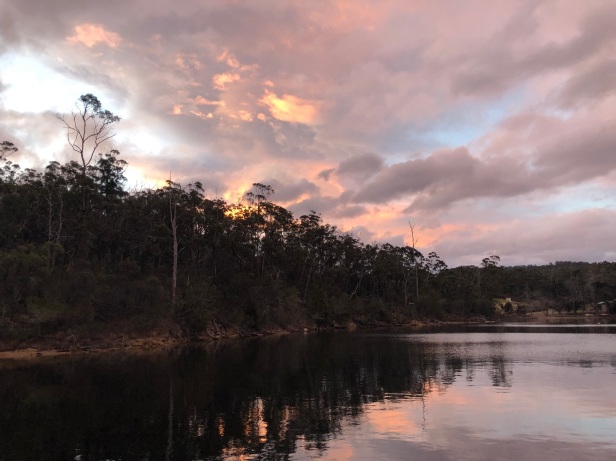 The shortest day is only two weeks away, but these clear still winter days are somehow invigorating and irresistible. We haven’t taken the boat away since Easter, other than for a trip to the slip to replace the through-hull fittings (another ouch to the wallet!), so we jumped at the opportunity to join the CYCT winter cruise to Port Huon and Franklin. It fitted perfectly with Derek’s travel plans, as he’ll be flying off around the globe a mere 48 hours after our planned return.

On Friday I collected an old family friend from the airport. We chatted over lunch, then I handed her the keys to my sister’s car – on the proviso she drop me and our provisions to the boat on her way to stay with my Mum! We loaded up the boat – an unusual single barrow load for four nights away – and she farewelled me to stow the groceries and prepare the boat for departure. 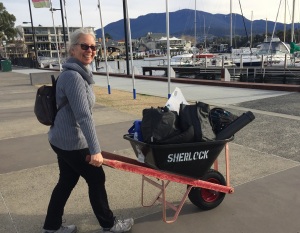 Derek managed to wriggle away from work early and by 3pm we were slipping our mooring lines. A 12 knot northerly gave us perfect downwind sailing conditions, so we hoisted both sails and were able to enjoy a quiet run down the river at 7 knots. 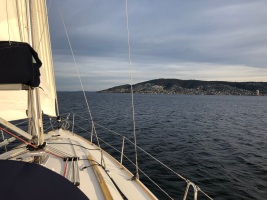 On the previous weekend we had replaced our faulty VHF radio, but even with expert advice Derek had been unable to get it working with the masthead aerial (which means that someone is going to have to go up the mast again…). For this trip we will be using our emergency backup aerial, which did test out okay. We had also refitted our repaired chart-plotter (remember that at the height of excitement navigating the Vansittart Shoals in February, the backlight on this device had failed? See Surviving the Vansittart Shoals   for the full story!). Just a few weeks before, we had also replaced one of our failed ST70 instruments with a new version (another three ouches the the wallet!).

Early into our sail we started experiencing issues with the GPS and instrument readings. Alarms were beeping and signals kept dropping out. Which of the three recent electronic upgrades was responsible? After fiddling with things below decks Derek climbed into the port-side lazarette to investigate the wiring to our five binnacle-mounted instruments. Whilst he was head-down in the cupboard I kept the boat sailing, but as I turned in towards Sandy Bay Beach in order to avoid a close encounter with the John Garrow light, that beautiful northerly breeze started to fade. Soon it was replaced by a light 6 knot breeze from the south. Time to drop the sails and turn the motor back on. 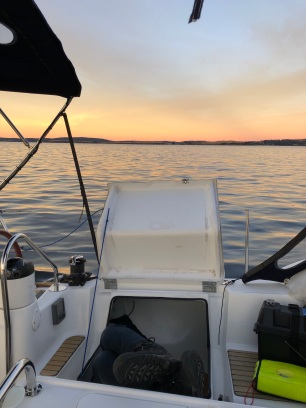 Derek’s penance in the cupboard finally paid off after unplugging one device. He’ll need to get some new parts to fix the wiring, but that’s enough about electronics for now!

We were treated to stunning skies as the sun set over kunanyi (otherwise known as Mt Wellington) and then made our way into Quarantine Bay by the light of a sliver of moon and the brilliant stars – with the aid of the chart-plotter. We found a mooring in amongst the intrepid winter cruisers who were already bedded down in the darkness, and went below for dinner and a bit of tv.

We were underway by 11.30 am – the younger crew took longer than expected to get ready for our weekend trip! We hoisted the main straight away, to take advantage of the favourable winds, thinking ourselves lucky to be sailing with the wind behind us for a change. It seems all too often we find ourselves travelling into the wind, or worse still, into bad weather. We set the headsail and enjoyed the quiet, training our new crew in perfect conditions. It is lovely to have Ben along with us for a change. He does have a lot to learn about sailing though!

We managed to keep the sails set until we were south of White Rock (at the end of South Arm), then we dropped the sails and served lunch – yummy salad rolls – as we motored into the Channel. There was a bit of wind about, so we proceeded into the calm waters of the Duck Pond, where we anchored quite close in to shore. We were greeted by two black swans, who noisily demanded food. The tide was out, exposing heaps of oyster beds, like strange plants emerging from every solid bit of sea bed. These were a bit of an obstacle course for our inflatable craft – dinghy and kayak – which we took out for a spin in the afternoon. We went ashore at the nearest ‘beach’, then around the small reef at the entrance and to another beach on the point. Ben and I tried the kayak sail on the way – but we were in a wind shadow. We could see the wind and waves rushing into Barnes Bay from the west.

We sat snug in our anchorage for the evening, playing board and card games and having spaghetti bolognaise for dinner.

A lazy morning with late breakfast of eggs and bacon today – the usual for a day on the boat with no fixed plans. At around midday we pulled anchor and nosed out of the protection of the Duck Pond to see what was happening in the rest of the world. We heard from Dave that he and Sue were out on Trouble, and having lunch and a swim at One Tree Point on the north east shore of Bruny Island, so we headed around to join them.

A good south-easterly breeze meant we were able to sail up the Channel, but we took the sails off when we rounded Dennes Point and were bashing into it. For a moment we wondered what we were doing out here in the wind, but soon we could see Trouble, a tiny white dot sitting calmly in the nook of One Tree Point. We pulled up alongside and dropped anchor, finding ourselves in the most beautiful protected little bay. We invited Dave and Sue on board for afternoon tea – a batch of fresh scones I whipped up on the way out!

After scones we all went ashore in the dinghy and kayak – all except for Derek who had to take a support call from the US… Dave and I had a swim in the crystal clear water – beautiful but cold! Wading out we met a small skate. Once I had dried off I walked with Ben and Sarah along the lovely little beach and up to the cliff-top to look down at the bay on the other side, where kelp surged in the swell. we relaxed for a while in the warmth of the sun, and before we knew it, it was 5 pm and time to head in to a

more protected anchorage for the night. One Tree Point is lovely, but a bit exposed for comfort, especially as the wind was predicted to swing around in the night. Dave had a story to tell about the last time he anchored here overnight, having to leave in the middle of a pitch black night and losing his tender, Short Wavelength, in the process, so we chose prudence, and both headed back into Barnes Bay, anchoring in our favourite spot off Quarantine Point – just near the Sea Eagle nest.

Dave and Sue came aboard for a BBQ dinner, and we spent a pleasant evening. After dinner they left and anchored a little way off before dark, and the rest of us played Catan (Pirate Isles) – with Ben the victor.

The morning dawned grey and drizzly, and though our anchorage was still and peaceful we weren’t lured out early. We had breakfast down below, but when I popped up on deck I did spot the sea eagle gliding over the trees to perch at the end of the point.

We spent the morning at anchor playing more games. The weather didn’t improve and after a hot lunch Ben and Sarah helped Derek deflate and pack away the dinghy and kayak before we headed out around the point into the westerly weather and made for home.

Once in the Channel the wind varied between ten and twenty knots. We put out a shortened headsail and rugged up. The kids hunkered down below, and slept for most of the trip home, while Derek and I sat on deck under the dodger reading and keeping an eye on the river traffic.

By about six we had berthed at Bellerive. Ben and Sarah collected the wheelbarrows while Derek and I packed and cleaned the boat. Soon we were on the road home, stopping at Susan and Sarah’s place to offload the kayak so they can borrow it for next week. We arrived home to a couple of lonely cats, and lots of washing!